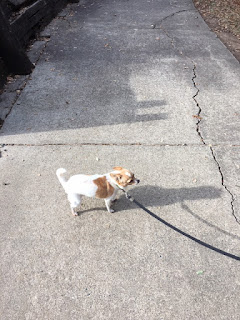 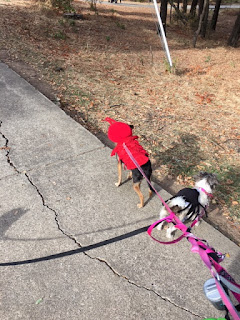 Look at poor Guest Dog Gibbs-- doesn't she look jealous? Soooo jealous-- she doesn't have a costume either.

*sigh* Poor Gibbs-- we're going to have to buy her a costume so she doesn't feel left out.

Chicken suggested a pirate since we have a lobster and a spider. Then she suggested a skirt--because her cat, Mrs. Poopy Butthole looks ever so fetching in one, and Chicken wants to share. 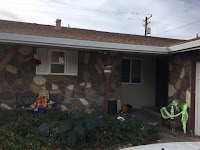 Anyway, Something--she just looks so sad and alone without her own little lesson in humiliation, doesn't she?

So, it's getting to be that time again--I told ZoomBoy he should go Trick-Or-Treating and he was like, "Yeah, but when does it stop?"

I was like, "When your little sister declares Trick-Or-Treating passe, then we shall be completely done with the ritual. Until then, you will only get upset because you'll feel like you're missing out.

And I have to admit--he and his brother had a good time decorating the house.

I know you can't see it, but back behind the pumpkin is a "cat mummy" that looks a whole lot like Gordie did, when he was alive. Since we've got three cats, a number of rats, a guinea pig, some fish and a hamster buried in that vinca patch there in front of the house, we do get a kick out of putting little plastic animal skeletons around it, with headstones.

We are sick, sick people around Halloween.

I'm pretty sure Johnnie has ditched the lobster costume under the bed where he knows we can't get to it.

We'll just have to think of something worse to put him in next year.