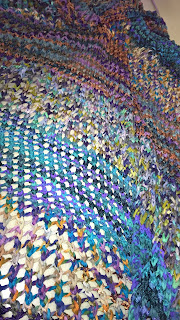 So, I'll be honest. Jay (From Joyfully Jay's) posted an absolutely adorable picture on Twitter, featuring herself wearing a scarf she'd made in Dragonfly Fibers.  She had very kind words about me as a knitting inspiration, and I felt very inadequate, because the scarf was amazing and because…

Well, this is what I'm working on now.

So I figure, on the one hand, this would be a TERRIBLE project to wear in public and say, "Oh, yes, it's an Amy Lane original!" because it will make about 1/5 of the population raise their eyebrow and think to themselves, "Keep this woman away from knitting, yarn stores, and any sort of paint and draw program because… damn!"

The other 4/5ths will say, "Oh my God, it's an AMY LANE ORIGINAL!!! IT'S AWESOME!"  Because they're much like me and they're sucked into the four kinds of WOW present in what's going to be a very large, very drapey and formless sort of wrap made for summer evenings and airplanes.

We'll have to see.  If it shows up on your doorstep, feel free to say you got it from Good Will.

I DO need to finish it though, because

A. I just re-orged my yarn into drawers and dismantled several UFO's and turned them into newly wound yarn again.

B.  I also saved some of those UFO's-- mostly socks-- and would like to finish them  and

C. My beloved friend and editor wants me to knit her THIS-- and sent me some lovely Madeleine Tosh worsted to make that happen.  Now, before you wander off and ignore that link, I need you to take in two things.  One is that NEIL GAIMEN is modeling that scarf, and that I loved the idea so much, I went and bought THE BOOK that has the pattern in it.  And I also bought the yarn featured in the ad right above the Mr. Gaimen's handsome, pixieish visage.  Which leads me to

D. Chicken would like me to knit her a cropped short sleeve cardigan with Say Nevermore, made by Blue Moon Fibers, the people who brought us Socks That Rock.

So see?  I've got to figure out what I'm doing quick and finish off that wrap!

E. I also have the wooby that Elizabeth North, Ariel Tachna and I all purchased in Dallas, so to make before the weather turned again.

But in case you were still wondering?