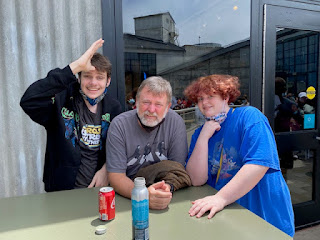 Yes, we went back to Monterey.

It's funny--fifteen years ago a trip to Monterey was one of the first things I'd posted. There was a picture of Squish, replete with hand knit pink baby hat, and ZoomBoy, then the Cave Troll, casting many a fit. Chicken and Big T were still in middle school, and my entire noisy, unruly brood was almost too much to blog about. Everyone was talking--everyone had a story, and I was hard pressed to keep up with it.

Things were a little quieter this time--but like all good vacations, this one did remind us why we were a family.

The kids still torment each other--but now they do it with their own row of seats separating them. When they were younger, we actually had a whole adventure when Mate pulled off the road in Lodi to buy them an entertainment unit because their bickering was so bad we weren't going to make it to San Diego (where we were going at the time.) Fun fact? Our credit card was canceled because who drives from Citrus Heights to Lodi to buy an entertainment unit for their minivan? *sigh* Fun times. But while quieter, the quality of torment has gone way, way up from those early days.

*  While driving through Salinas to drop the dogs off at a pet sitter, ZoomBoy leaned over to Squish and whispered, "Do you see the rabbits, Lenny? Do you see them?" Given that I nursed them both through Of Mice and Men, this was sadistic fuckery at its finest.

* There was much bitching and moaning about having to share the hotel bed because, oh my God, ZoomBoy COULD YOU NOT FART? Squish would not let him rest--to the point where I got up to go to the bathroom in the middle of the night and found him huddled on the bare floor in the foyer. I put a blanket on him and went back to bed. I was done at that point. He returned to bed shortly after that, thank God. I have no idea what prompted the move in the first place--if nothing else, there was a perfectly serviceable chair and ottoman next to the bed that would have been more comfortable. 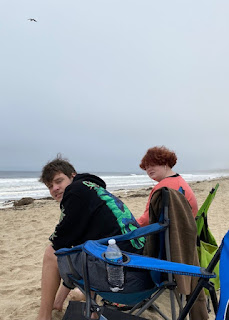 Squish was unamused, unimpressed, and unapologetic.

That's okay-- in retaliation, when we took the kids out for dessert one night, ZoomBoy intentionally got ice cream, because the farting thing is real, and he knew it would make Squish's life miserable in the hotel room.

So there was that--both mildly irritating and mildly amusing--and there was a trip to the aquarium (which was why we took the dogs to the pet sitters). The trip to the aquarium was, as always, enchanting. There were LOTS of people--and that took some getting used to. Mask rules were enforced, so that helped. As I was wandering around, thinking, "Oh, hey, the California eel is actually sort of a handsome guy compared to his cousin the Moray," it occurred to me that one of the really great things about the aquarium is that it highlights the non-spotlight animals. I mean, you go in thinking, "Oh, otters! I love the otters! And the giant squid! He's great! I adore him!" which is great-- they're very squee-worthy. But the sorcery performed at Monterey Bay is to get you to see the magic in ALL the creatures--even the ones that look like penises like the Innkeepers Worm, or the weird corals that look completely vaginal. It's like you go in thinking, "The otters are the BEST! The giant squid is the BEST!" and you walk out thinking, "Did you see the Chill Fish? He was the BEST fish, because ALL fish should be CHILL!"

And of course we went to the beach.

I'll be honest--the beach gave me a reality check. I love it--I always love it. And I've been SO proud of my progress in terms of steps and walking and working at being a slightly more fit large woman. But there was a dune of loose sand we had to walk down to get to the beach and getting up was... embarrassing. It was a step at a time progress. I really thought I was going to have to lay down in the sand and have the kids roll me up. I was so disappointed--I really thought I'd gotten past that, but apparently, I'm still a large woman, although marginally more fit than I was last year. *sigh* Well, I'll keep working on it, but I was NOT  a chill fish, I'll admit it. 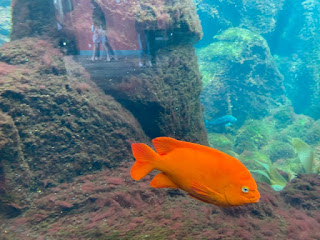 But generally it was a good vacation--and one of the most fun things was unexpected. For a previous car ride, I got Mate absolutely addicted to the Jim Butcher Harry Dresden audiobooks. We'd already finished the Craig Johnson Longmire books together, and listening to him really enjoy the Dresden books has been a treat. Just see him wandering the house with his earbuds on muttering, "God, Harry, you're such an asshole!" is worth its weight in gold. Anyway, I wanted to find a good alternative for him because he's nearing the end of that series, and I found that Darynda Jones has a new series out--contemporary cozy, the first book is A Bad Day for Sunshine. I started that story and Mate and I were enthralled. It was so much fun. And I assumed that the listening was for me and him alone--the kids had their own entertainment, right?

But when we arrived home, he killed the motor with reluctance and we discussed how we'd finish the end of the book, and when I got in the house, Squish said, "Man, I hope you listen to that the next time we go somewhere. I want to find out what happens!"

I had no idea she was even listening. That was a win all around!

And so was the vacation--my family, once again, proved that we are loud, unruly, obnoxious, and my favorite place to be.