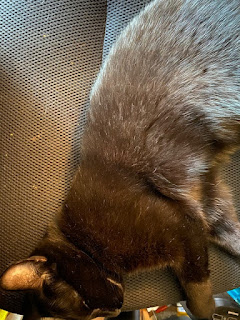 Okay-- so FaceBook, being the pile of garbage that it can be--has banned my blog as abusive.
I don't know the qualifications of that--I mean, I've called the president some pretty nasty things here, but mostly, it's kids and dogs and knitting and books, so maybe it's something else. A troll, a hater--doesn't matter. FaceBook, where my blog gets a number of its hits, is a no go, but the blog itself streams to Amazon and GoodReads, so I don't want to close it down completely.
Besides--I've kept a nice little stream of consciousness record of my family growing up, and I don't want to lose that. I still talk about them once a week or so, although most parents know that after a certain age, the hilarity happens less often, but more intensely.  I do like the idea that my kids' growing up is on journal here--for my sake, if for now one else's, so, leaving it to rot isn't such a great idea.
For the moment, I'm going to try a little bit of double-posting, both here and on my website, and see if that works. I'll watch my Ps and Qs and try not to compare British television cops to real American cops (I swear to God, that's the post that got me banned!) and let's see how it goes! Maybe it'll help me keep my website up-to-date, because God knows, that's not something I'm great at, even though it's really pretty easy to do. (I do pick and choose my favorite jobs. Writing and editing--yay! Blogging--yay! Promotion? Are you kidding me? Seriously?)
Anyway--I'm reluctant to let it slide. I just am.
And a word about Squish's cat--
I seem to be in trouble for "spoiling" said cat. It appears as though I've given that cat a "wet food" habit, and I'm responsible for the creature not being the lithe, delicate young thing it was when it arrived here, six months ago. My response to that was A. He's the closest thing to a grandchild I'm likely to get so grandma's gonna go to town, and B. If I'm so responsible for his chubby little body, how come HE'S the one eating dog kibble after cleaning out the cat food bowl, hm?
It doesn't matter. In a world where you're locked in a house with your parents, with only your phone for company, Mom's the bad guy.
But Grandma, on the other hand, is a HERO!
Here, kitty kitty kitty--Grandma's got some lunchmeat for ya!
Posted by Amy Lane at 12:15 AM

I originally came to your blog through Facebook, but I follow it through Blogger, and thoroughly enjoy the peek into your daily life. Your books are some of my absolute favorites; your characters so often touch on the painful parts of my life and resolve things with a happy, hopeful ending, which is a joy. (I'm rereading Deep of the Sound at the moment). And your life has a fair number of things in common with my own; your challenges and funny stories are a comfort to read about as well. I hope you continue with it, it's a bright spot in my week.

I'm glad you're keeping it going! I do check a couple of times a week to see if you've posted and love the snippets of your and the kids' life.

And go Grandma! Grandkitty will lurve you always.