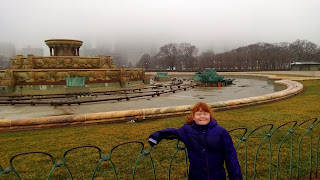 Okay-- so we got out of the house which was awesome.  Seriously-- my parents were almost late, and then Mate forgot the tickets to the ball game and then we LITERALLY walked through security, up to our gate, and into line.  If they'd had to pat me down for my maxi-pad again, like they did before my LAST flight, I wouldn't have made it.

The flight was relatively sweet after that.  I sat with Squish, and we came out of the low cloud ceiling practically on top of the landing strip, and after we bumped for a minute, Squish said, quite loudly, "That was, US, landing!"

Well, she got a good laugh out of the people in the airplane, and that's the truth!

We arrived and walked around a bit--a long bit, and I came to love Grant Park, even in the chilly drizzle.  I sort of love Chicago.  While it has the energy and vibrancy of Manhattan, it is not, in fact, and island.  There is a distance across the the streets and while the wind has been fierce and cold, it is not, as of yet, malicious.  Punky and aggressive, yes, but downright pugnacious?  No.  I'm not getting that feeling.  You gotta be tough to contend with it, but not brutal.  Of course, it's spring--I'm sure the wind is taking it easy on us at the moment-- we only had a few snow flurries today and I feel almost welcome.

Of course getting dressed for the cold weather (I mean, it's colder here in April than it was most of the winter in Citrus Heights) is a bit of a challenge.  Yesterday morning, Squish was getting dressed in as many winter clothes as she could manage.  "I feel very comfortable," she assured us as she was putting on her clothes.  I should hope so.

And when we went to the baseball game yesterday, I think the kids felt differently about the wind.  It was cold--I mean... holy fuck was it cold.  I bought souvenirs-- I bought a souvenir hat, two pairs of souvenir gloves, and a souvenir blanket.  No, I'm not planning to convert to being a Cubs fan-- we just hadn't brought that stuff with us and the kids were gonna frickin' DIE sitting in the 40 degree weather.  But it was funny.  As the game was wrapping it up, San Francisco (who had a surprising number of fans in the stands--go Giants!) tied the game up in the top of the ninth.  I was DEVASTATED.  I mean, I'd been a good sport, I'd actually followed the game, I'd eaten a hot dog, I'd sat in the cold--hell, I even started rooting for the Cubs, because I was getting a distinctly Sacramento Kings vibe from that much loyal desperation.

And the game was TIED.  As Mate said to Zoomboy-- there ARE no tie games in baseball.

Oh FUCK, you mean, I might have to sit in this weather forEVER?  So, at the bottom of the ninth, I was standing there in my Kings hat and my Cubs gloves, in front of my children under their Cubs blanket, screaming my ASS off for the Cubs to score, goddammit score, so we could get out of the frickin' cold!  (Look at the picture, people.  Squish is UNDER HER COAT-- too cold to poke her head out!)

And Chicago DID!  And they WON!  And complete strangers were high-fiving me because THEY THOUGHT I WAS A CUBS FAN!

I high-fived them back and let them keep their illusions.  I mean, hell-- they were nice enough to not boo my husband and parents in their Giants hats--I figure it was the least I could do.

So we went to deep dish pizza for the SECOND night in a row after that.  Honestly, I can see why Chicagoans are known for their high-carb comfort food-- it's only survival here, right?  But when we got back to our hotel room, I was hormonal, tired, footsore, bloated, crampy, and, well, fruitlessly obsessing about the critic who called me everything but racist for DARING to write a black character in America who was not heroically rising above his oppression but was, in fact, a bit bitter.  (Do NOT get me started on the racism implicit in the belief that I can write all of the flawed white men that I want, but that if I write a flawed man of color I am doing something wrong.  NOTHING makes a person angrier than being told he or she has no right to be angry when there is injustice all around him or her.  Ask any woman who was told to get out of the staff room if she couldn't take a joke, and you will hear EXACTLY what I mean.  No WONDER Terrell was pissed off, that's all I'm saying.)  Anyway, I think normally I could have taken a deep breath and let it go, but I DID mention the crampy, hormonal, footsore, bloated, and so far from my home, right?

I needed chocolate.  I did, and I went down to visit the gift store before it closed to get some.

I asked the bellman how close the nearest chocolate for purchase was, and I was told it was two blocks away.

I looked down at my feet in their flip-flops and my body in my sweater, no coat, no scarf, no hat, no gloves, and almost cried.

The bellman said, "What's your room number, sweetheart.  I'll see what I can do."

And then I almost cried for kindness.

So Mary got a text at almost eleven o'clock at night.  "How much should I tip this guy?"

So I tipped him a LOT and he gave me a kiss on the cheek, and I hope he had a VERY GOOD night because he about saved my life and the life of my children to boot.

Anyway, this morning it was snow flurries, and, yes, we were the crazy tourists who sat on top of the double decker bus in the snow.   Remember that alpaca cape with the hood?  I think today was the day it was made for, even though I finished it in the middle of June and thought I was crazy.  But by the third snow-flurry my husband and I were done, and we went downstairs and then got off at Portrello's which is awesome.   We got back on a different tour trolley, where, we realized, if it was dreamt of, created, fixed, or painted, it ALL started in Chicago.  The Ferris Wheel?  Chicago.  Walt Disney?  Chicago.  The hot dog?  Oh yeah-- that wasn't Vienna, that was Chicago.  It became sort of a giggle trigger for us-- that and Upper Whacker and Lower Whacker... heeeee!!!  (Yeah, we're juvenile, so what?)

But, finally, the tour was done, and we were exactly where we wanted to be:  at the art museum.

We enjoyed ourselves, and the kids remembered a LOT but even Squish has her limits:  Mom, can we go somewhere there isn't so many naked people?  Which is how we left the Picasso exhibit to go see the Impressionists, and that was okay too.

So, this is Chicago, part one.  I think you'll agree, Squish stole the show!

Oh, and for those of you who follow me on Twitter, it was my FATHER who gave me shit about buying chocolate when I had a basket full of maxi pads.  He's normally a very nice man-- but, well, Jesus, my stepmom should be nominated for sainthood sometimes.