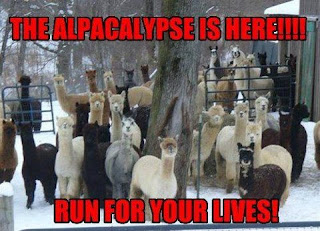 Well, mostly it's T's birthday.  He's twenty, and that's pretty awesome.  He's turned into a very nice young man, and if I'm worried about one aspect or another of his life, well, then, that's motherhood.  I've quoted Sylvia Plath's "Riddle in Nine Syllables" before, when she said that pregnancy was "getting on the train there's no getting off"--I have to tell you, it was a pretty huge realization for me.  Big T is proof-- I will never stop worrying. 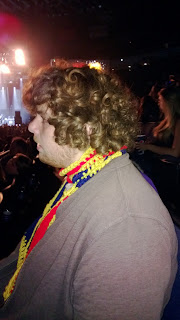 But he's still an excellent young man-- he's kind and funny.  His latest obsession is It's Always Sunny in Philadelphia, which is one of those horrible shows where you dislike all of the characters but you can't help but watch (well, I listen) because the writing is so clever.  Today's quote--that cracked us both up-- happened after one character suggested he and his brother do something inane and pointless--for the fifth time.  "We won't do that.  You can!"  We've been laughing about that all morning.  We're having some dessert tonight, but mostly he wanted to wait until Sunday, because his sister will be home, and we can all go to a movie together and then out to dinner, just like during his high school years.  The thought makes me really happy and a little sad-- it's like a cheat out of time, but I'll take what I can get.

Anyways, it's not just 12-12-12, it's also 13 days before Christmas, (and, if anyone's counting, 8 days before the Alpacalypse, and if you think I'm kidding about that last word, I've gotten the meme about six-thousand times on Facebook--it's fun!  It's like a furry Ragnarokian in-joke with the whole world!)  So, to celebrate, on Sunday we went and got a Christmas tree.  It took about five minutes.  It seems that the day before (when we were going to the Killers concert) had been some sort of perfect storm at the Christmas tree farm, and they had, maybe, thirty trees left.  Fortunately, they were all awesome, because about three minutes after I licked my Christmas tree (figuratively) Zoomboy fell down and skinned his palm.  Now some of you may be thinking, "Aw, well, kids do that all the time." 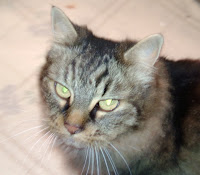 You're wrong.  It was the end of the world.  He was showing us his wound for the rest of the day and telling us he was so glad he didn't have to write with his right hand and then we had to speculate on the origin of the word "right"meaning side of the body, as opposed to "write" and it's other homophone, "right" meaning correct and/or morally sound.  Yeah.  That kid's not gonna end up on a football field or a track unless he's carrying a flute, mark my words.

And in other, random news, we managed to talk the outside cat to come inside.  Now, not only will Shulamonster NEVER LEAVE, she will also NEVER LEAVE US ALONE.  And poor Steve.  Steve is missing her quality mom time, and blaming mom for the fact that her once-favorite slum-kitty is now sitting in Steve's bed and sucking up to mom during the morning trip to the bathroom.  She may never forgive me, and I feel bad.  Plus, Shula likes to nibble.

So, Mate and I went on our first trip Christmas shopping.  In an epic twist of fate, Mate (get this--it's huge, it never happens) ACTUALLY BOUGHT STUFF on the first day.  Craziness, I tell you-- CRAZINESS.  Anyway-- you can see that we stopped at Barnes & Nobles first, and truth be told, we both feel better about buying books for Christmas.  The big table of bound classics tickled us both-- there was Jane Austin right next to Douglas Adams and William Shakespeare cheek by jowl with Isaac Asimov.  Seriously glorious bound volumes, and since we have two young adults on our list who love literature and may move into the world eventually, we thought it was a good place to stop.

But it wasn't the only place we stopped, and by the time we were done, we had some bags.  Some bags that needed to be hidden.

We were pulling into our driveway when our usual problem asserted itself.

"Where are we putting this shit?"  I asked.

"The one we can't open because it doesn't have a doorknob?"

At this point, Mate walked into the house, jimmied open the door, and, in two minutes, managed to pull out NINE YEARS of accumulated crap in one go.  The following conversations took place.
***

"Wait, are those pants we bought for Squish and never gave her?"

"No, they're pants Chicken wore into the ground and we were giving to Goodwill."

"The last time we used it?"

"Yeah, I thought so-- we can throw the sunblock away."

"So, uhm, this stickiness on the ground?"

"Any reason for that?"

"All the binder paper?  Yeah.  There's reasons for it."

"Look, here's one of Chicken's old coats.  Can it fit Squish?"

"Good--we've got at least three coats for Zoomboy as he grows too."

"That's great!  Got your money's worth out of that didn't ya!"

And remember, we were doing this all before I had to go get the kids.

But we did it.  We cleaned it out, we jammed some presents in, and we covered them with coats.  It was awesome.

Of course, the kids can never know, and that sucks, because it's the kind of thing that Mate and I usually do the gloat-gloat dance, because it proves that YES, we ARE grownups, and we CAN clean like regular suburb dwellers when the circumstance calls for it.  Like, when our parents are coming over, or we need to hide stuff from our kids.

I have a closet just like that. It is in serious need of attention. I fully intend to get to it this spring or summer or maybe next fall. There's probably no Hallowe'en candy in there, though. We never lose/forget candy.

And the kids never read your blog - right?

Closet cleaning and shopping in the same day? You are my heroes!