So, back to trying to finish this GD book. (Thanks, Karen Rose for the acronym--GDB--it should go down in history.)

It should be done by tomorrow, but I think it will be closer to Monday, and I'm really sort of loving it. God, urban fantasy--even quirky, low-key fantasy--is just so much fun.

Anyway-- it was mostly a low key day--walked the dogs, did the grocery shopping, took Chicken some soup. She came home with the crud, and, well, I haven't seen her new kitty, who is a hyperactive adorable little goblin and I love him.

Anyway-- came home and watched television and am about to write again. Woohoo!

But something fun DID happen to me today-- as I was walking I came across a distinguished, silver-haired gentleman with three smallish dogs on a leash.

"My dogs are all dog friendly," he proudly pronounced.

"Mine are idiots," I said. (This is my standard answer.)  "The cute one has super aggressive body language but she has bitten neither man nor beast in five years. The cowardly one is afraid of everybody, but he has manners."

The nice man made nice noises about what good dogs I have (yes, I think they're good dogs, but I don't like to give people unrealistic expectations for their situational comprehension) and I asked about his.

Yes. Yes, that was a pit bull and a dachshund mix. What did it look like? Like an animator tripped some acid and drew a dog, why do you ask?

Seriously-- big head, long body, and, of course, the best part: dog. He was a dog, and therefore better than 99% of most humans.

The Chiweenie was also a dog--but apparently the old soul of the group. The Pit-Weenie was a baby at two, and apparently still growing. (Lengthwise, I assume.) The Chorgi was finally getting used to all the young chippersnappers, but she had made her peace with her odd troop of Chis and Weenies, and that was probably for the best.

And as I walked away, I thought, "Hey-- that was like an Amy Lane family, only in dog groupings. A little of this, a little of that, the least likely people in the most everyday of lives... Cool!"

Which brings me to my job, which, well, I'm off to do! 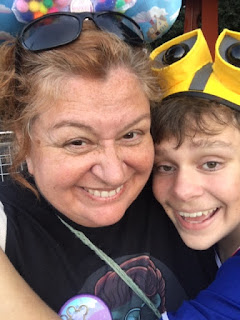 But first, a big hearty Happy Birthday to ZoomBoy. He turns 16 tomorrow, and while we did most of our celebration at DizzyLand--and are thus broker than broke atm-- he deserves all the bday love all the time.

Quirky, hilarious, awkward, graceful, brilliant and out to the zoo almost by the minute, he's our cave troll--because he had us outnumbered from the first--and our ZoomBoy, because his brain goes zoom, and Thing 3--the oldest of the second set and the youngest of the boys.

He has the potential to be all of the magical, marvelous things, and I know this, because so often, he already is. And those other times, we can attribute to growing, and oh my stars, we have all seen him grow.

So happy birthday, my beautiful son--you are stunningly loved.