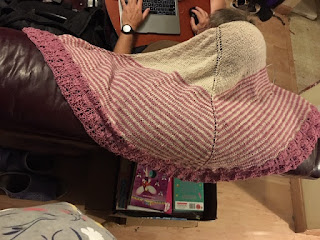 So, I met my cousins when I was back east, and I always forget--and I shouldn't--how very much I love them.

Anyway--I walked away willing us to be more in touch.

I sent them books--although I don't blame them if they don't read them-- and I decided I wanted to make them something.

I'm making shawls at the moment.

Shawls it was to be. 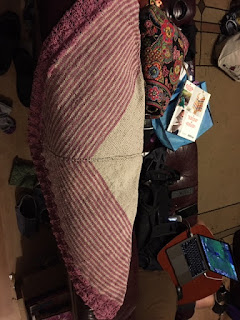 So this is the first--I've started three others. It's the Oaklet shawl and the designer was nice enough to offer it as a free download on Ravelry. If you're looking for a way to ease into lace, this is a good one. It's worked from the top down so you really just have to master the YO first, and then, when you're good and comfortable, there's a very basic lace pattern that repeats for about eight rows, and then a slightly more complicated one that it finishes off with. Seriously-- it's like it was written as a training project, and it's pretty awesome. 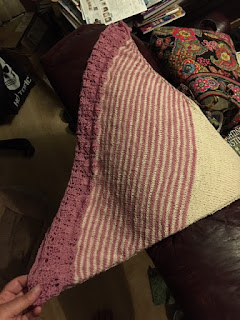 Anyway-- the stripes were my idea because I got that far with just the ecru and went, "Hello, this is driving me batshit insane."  Oddly enough, switching colors every two rows helped keep that down.

And it came out just so damned pretty.

So, I'm starting a book and I finished a hard edit and I'm into knitting that doesn't stress me out. Could go worse than the Oaklet.