Getting to Know You...Jai/George Part 5 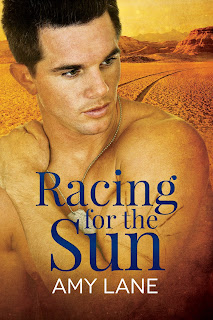 It's been a while since I visited Jai and George--I seem to remember there about to be sex...

Which I may not get to tonight--but I WILL get to it.

George could barely contain himself enough to sit down, but Jai insisted. He'd cooked dinner, was plating it up on camp plates, and had even brought the good quality paper napkins and he kept apologizing for not remembering wine.

George's last boyfriend didn't use napkins and probably would have brought cheap tequila and inhaled it from the bottle.

Watching as Jai cast him surreptitious little glances as he prepared a simple meal on a camp stove was such an improvement.

"So," George said, hating to break the companionable silence. "How was your month?"

Jai shrugged. "My month? It was good. Lots of people trying to destroy their cars between LA and Vegas--Ace likes to say he loves those people, they keep trying to make us rich."

George laughed a little. "Nice. I'll have to try not to be one of them."

Jai rolled his eyes and brought their plates over. "Try harder. For God's sake, if you wanted me to look at your truck, you just had to ask."

Oh how embarrassing. "I'm not!" he defended. "Is it normal for it to need work so soon?"

"No," Jai said matter-of-factly. "The engine is dying. Could be fifty miles, could be five-hundred, but your bearings and seals are going to blow."

George stared at him. "That isn't good."

"I have just enough money to put money in my gas tank and get back to my little apartment in Northridge and eat noodles until I get paid next week."

Jai's glare was truly fearsome. "Do you have a drug problem?"

"Are you paying a blackmailer?"

"NO! And whatever the next awful thing you're going to ask me, no to that too."

"Are you taking care of elderly parents?"

George paused, wondering what Jai had skipped and then deciding he didn't want to know. "No--they're doing just fine in Palm Springs."

George let out a breath and touched his nose. "Bingo."

"But your parents are rich?"

"Yeah, but I ran through a lot of their money studying stupid shit before I decided to get my nursing degree."

"You can drive my Toyota home for a month. Sonny and I will make your car a project."

George swallowed his next bite too fast and had to work hard not to choke. "I am not putting out for you just so you can fix my truck!"

Jai's laughter had not gotten any worse over the last month. Rich, round, echoing--it started a stroke in George's stomach that was like foreplay for foreplay.

"But you are putting out for me?" Jai asked, amused.

"After that kiss?" George challenged. "You betcha!"

"Good." Jai took another bite of spaghetti and George followed. "Now tell me about your month."

"Busy," George said promptly. "I picked up a couple of extra shifts so I could get this weekend off. Amal was going to have kittens when I told him I was coming up camping with a total stranger. I tried to explain that it was a date like any other, but he expects me to turn up missing Monday morning."

Jai chuckled some more. "This Amal--he is a supervisor, or your friend?"

"Both. We tried to date. It was like drinking a caffeine free diet soda."

"Yes! Oh my God--yes. You understand. Everything that was wrong with the world was in that kiss. But we get along so well--it's like the gods said, 'Here, you shall have a work friend you are guaranteed not to loathe!' And boom. There we were."

"What makes him such a good work friend?" Jai asked, polishing off his spaghetti and turning on the picnic bench so they could look at each other. Night had fallen as they'd eaten, and only the faintest twilight threw Jai's face into darkness.

"He laughs at my jokes," George said promptly, and then because twilight was always such a serious time of day anyway, "and he knows how to make me laugh when the job breaks my heart."

"Mm." Jai took George's hand in his and stroked the back of it with his thumb. "The job hurts your heart?"

"ER," George said with a shrug. "Sometimes it's junkies who need detox, sometimes it's homeless people with fungus foot, and sometimes..." Unbidden he thought of the two-car crash he'd attended that morning, with four kids in the back of each car. There'd been three fatalities in the end, all of them children, and hearing the two mothers--both with serious injuries of their own--cry out in pain that would never heal--that had shaken them both. George had gone outside during his break to try to breathe deep and get his emotions under control, and Amal had called a fifty dollar grocery delivery for the entire unit--all donuts, cookies, and pastries.

"It was bad, today?"Jai said, breaking softly into his thoughts.

"Yeah. It was kids. That's always rough. Amal ordered like... six tons of Oreos and an entire cheesecake for the floor. We all walked through the nurse's station and shoved sugar at each other. It was... it was funny, you know? Sad but funny. And sort of awesome. Being human is hard sometimes."

"That is a good friend," Jai said. "Like Ace. He makes me come to his house twice a week for dinner. Sometimes I watch movies and sleep on the couch. There's nothing fancy--and we don't like the same movies at all--but he does it so I know I'm not alone."

"Yeah," George said. He brought his hand up to touch Jail's cheekbone with his thumb. "Maybe that's enough of us talking about other people for a minute."

He felt, rather than heard Jai's gentle smile, and then Jai lowered his head for a kiss.

A kiss like dessert, sweet and decadent and a little overwhelming, George was more than ready to give in to the current and get swept away.

Jai hummed and wrapped his arms around George's shoulders, and rather than feeling powerless, George felt empowered. This man--this massive man--who could care for George better than any man in his life--had made him for a date--on time--and promised to do nice things for him and fixed him dinner. Everything a good man was supposed to be, this gentle giant was. George didn't particularly care how many men he'd killed at this point--he wanted to know what it felt like to be protected and cared for.

All his adolescent selfishness had been leading up to this moment, apparently, because he wasn't going to give up this night for anything.

Jai pulled back, chest heaving, and rested his lips on George's forehead for a moment. "If I don't clean up, there will be animals. Do you want me to build a fire or--"

Jai kissed his temple. "Then you go into the tent and stoke the fire," he said, laughing at the dirty pun, "and I'll clean up. Don't worry. I'll be there shortly." He paused. "Oh! Here." He pulled out his phone and punched a link. "See?"

Jai wrinkled his nose. "No. Why would it be my real last name? Are you kidding me? But it was my real blood. See?"

"No, I shouldn't have laughed. Here."  He reached into his pocket and pulled out his printout, dated that week. "Here's mine."

"George C. Carmichael. What is the C for?"

"It is a good thing you had a misspent youth, George, or your name would make you invisible." Jai swallowed, and the air about them grew serious. "Thank you. For trusting me. For... for making a promise and keeping it. I'm going to clean up. I'll be in the tent shortly."

As George made his way back to the tent, left his boots at the entrance, and then undressed quickly in the chilly night, the buzz of anticipation made it hard for him to keep the tremble out of his fingers. Finally he was naked, and, with a little help from one of the disposable ampoules he'd packed, pre-lubed. HIs own fingers had been cold, parting his cheeks, squirting up his cleft--but it had been worth it. When Jai appeared at the tent's entrance, toeing off his own boots and then undressing carefully, he looked so serious. George wanted nothing between them, nothing in the way of what was going to happen next.

He was naked quickly, which was a shame because George could make out nothing in the near darkness inside the tent, and then he was inside the sleeping bag. George was on top of him before he could so much as zip up the side.

George had been waiting for this. Waiting to make love to this giant of a man. From Jai's kisses George knew he could be passionate--knew he could be in control--but George was not prepared for the way he completely took over.

With a growl he rolled back over, putting George on his back and holding his hands over his head.

"Slower," he grumbled. "Forever trying to rush things. I like what comes next."

... And it will happen tomorrow, when I am not falling asleep!!! Sleepy writers write bad sex--it's true!