It doesn't matter how i try to photograph it, I'll just never never get across how totally cool the whole thing is.

My parents go to this RV park not far from Sacramento-- as in, an hour's ride, max.  During most of the year, it's an RV park in the middle of a cow field. Like… literally.  You look out over the tightly packed row of RV's, and there are cows.

The other side is the Jackson Hwy, a two lane road that stretches between Sacramento and Auburn, with a few stops in between.  This town-- Plymouth, is one of the stops.

During Halloween, it becomes something entirely different.

During Halloween, it becomes Halloweentown.

Everybody decorates. And if, say, one in maybe thirty spots isn't decorated, well, they're RV parking lots-- it's not like you're walking across the street and a quarter acre spread to see if somebody had candy or not.

Everybody dresses. And no, not all the outfits are awesome, and sometimes it's really just a T-shirt that has a black cat on it, but everybody is doing something for Halloween, and usually it's something pretty awesome.

I mean, I admit to being uncharmed by the guys in lab coats claiming to be Dr. Feltyersnatch, OB/GYN, but I was plenty charmed by the entire family of pirates, that you might be able to make out somewhere in all of my shitty pictures.

Even the dogs dress.

My parents and aunts and uncle went as knights and ladies of yore.  The dog had a hauberk and hood, I shit you not.

And, if maybe only one person knew who my family was (Gravity Falls, people, it's a television series!) that was okay because that one person did a spot on impersonation of Sus, and we knew that we'd done our jobs right.

And my kids got back from trick-or-treating feeling like they'd conquered the world because they'd hit the entire park and then they gave out candy and helped man the trebuchet and jumped out screaming "Oooga booga booga!" trying to terrify toddlers. (I think Zoomboy got that from my dad. It didn't work.)

Actually it was a series of catapults that my father made with PVC pipe, kitchen spoons, and big rubber bands. The object of the game was to fling the light foam balls (painted orange) at the big cardboard castle (painted gray and strung with lights.)  Thus, my parents as knights and ladies of the round table, get it?

Did I mention the nonstop AWESOME!

Anyway-- so that's why we left our house, even though it was pretty niftily decorated too, and drove all the way out to Plymouth to not be recognized in our costumes.

There are also games all day--and Squish and Zoomboy DIDN'T win the screaming contest.

But according to all reports of random strangers wanting to pose with them as they trick-or-treated, they SHOULD have won. Seriously, "Yoiu guys were the best. You should have won. Can I take your picture?"

My kids had the best time. 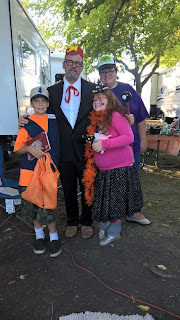 And Big T got to sit at home and watch scary movies and hand out candy.

And the dogs got to go insane.

Happy Halloween, everyone-- may you sleep the hell in tomorrow.

I know I plan to!