Halloween Stories and The Car is Blue

Long, long years ago (nearing on 30 years, actually)  I had this little Datsun-- yes, it was a Datsun, it was made before they were called Nissans--and I said it was blue.

The entire family said I was crazy, and the car was white.

"Well, all we see is a little white car. You know you need glasses anyway. You must be colorblind."

Well, a few years ago, that color test started making the rounds-- one of those ones where you put the colors in order?  Apparently if you had a score of 20 or less, you had a really sensitive color sense. I got somewhere in the low teens.


And so I say again, the car was blue.

And I resist the temptation to shake my ass and blow raspberries at my entire family and friend set from that period, because they told me I was crazy, I was color blind, I was too stupid to know blue from white.

But I am going to remember that moment, as my life gets stranger and stranger and more and more divergent from the life I thought I'd lead as a teenager.  My vision was true.  Just because the whole world did not see what I saw did not mean my vision was not true. It's been pretty much the story of my life.

So, with that thoughtful moment aside, Halloween was pretty much wackiness all around.

To begin with, I made a quick trip to the market for little things, like cat food and toilet paper, and I passed a looming, deformed figure in black about three times.  The costume was great-- one of those ones where the skeleton head balances on the black shrouded real head, and there are arm extensions to make Death look more elongated and more macabre.

The first time I waved-- and he waved solemnly back.

The second time I waved and laughed, feeling uncomfortable.  And he waved silently and solemnly back.

The third time I said, "It's a dirty job, but someone's got to do it."

And I almost shit my shorts.

"Well good--because you're doing a bang up job of it, I almost died of fright." 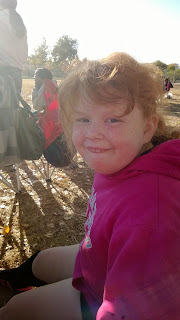 It has occurred to Mate and I that we have not bred the most aggressive of children.  This was made clear to us when we approached a house with an "honor bowl".  Our kids approached trepidatiously, and were looking at the choice, planning to make a judicious choice when…

They were overrun by half the neighborhood, who swarmed like locusts and ran away, leaving our kids staring at an empty bowl and rubbing the cleat marks off their backs.

"They didn't even let us get one!" Squish complained.

"That's okay," I told her, trying to make her feel better.  "We have at least six extra pounds of chocolate at home."

Which was about how much I shipped to Chicken in San Diego.  Happy Halloween, Chicken-- make sure you give most of it away, it's bad for you.

And I went full on Mama Bear on some poor student the other day.  Yes, yes, I usually take a savage anti-bitch stance on the minimum wage worker in a shitty job, but this person (who works the mail room of my daughter's apartment complex) basically refused to look for Chicken's actual name when looking for her packages.  So, my baby, tired from midterms and very homesick, had three packages, one from me, one from my mom, and one from herself, all dedicated to making her feel better, and these idiots couldn't look beyond the apartment number and look at her name.

And they made my baby cry.

And suddenly I didn't give a shit about how much money they made in their jobs, I wanted them to do their jobs better.

So I yelled and they found her stuff.

"Geez, Mom-- you yelled at the sweetest guy in the front office."

"Tell him to be less sweet and more competent.  It's not like you have a name you find in every classroom twice." 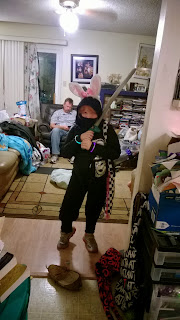 Yup.  Sometimes Queen-Bitch is the way to go.  (Give me a couple of weeks and I will feel guilty about this.  Right now I'm riding the empowerment… let it go.  It never lasts long enough.)

And Squish knew exactly what she wanted to be for  Christmas.  She wanted to be a Ninja Bunny.  We went with it-- you heard the story.  The Playboy Bunny ears and tail, the ninja costume, the sword.  And then we told Chicken what she was for Halloween.

And Chicken said, "That little shit.  She got that from me."

"You told her to dress up as a ninja bunny?"

"No!  But when I was there for my birthday I showed her THIS."  And she sent me the black and white picture to the left. 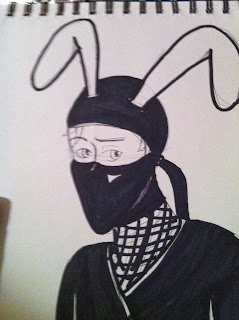 And I was even more impressed.  Because that was a joint effort between my girls and me and their father.  Best Halloween costume ever.  (And the fun part about it?  Nobody ever questioned it.  "Oh, you must be a ninja-bunny!"  "Yes.  Yes I am!")

And that's it-- Halloween Stories and the Car is Blue.  Oh-- and one more thing.

I think I've decided on my newest Cafe Press item.  It's going to be a T-shirt that reads, "Put the E-Reader down and walk away."  A number of book-a-holics have assured me that this will sell.

I had a 1978 Datsun that I loved! Best car, ever! You could take the keys out of the ignition while driving and the car would still run. It's the car I learned to drive a manual shift on.
The kids have great costumes, Mate looks very content on the couch, I'm sorry Chicken cried. Midterms and homesickness suck.
Smooooooches

Hallowe'en was meh around here. The kids weren't very creative and there weren't many of them. I miss the old days (and now I sound old.....)

Well of course the car was blue. People are blind. Especially the very sweet incompetent who couldn't find Chicken's packages. (Why didn't they have the right apartment number on them? Has she moved?)

I adore the ninja bunny! And Darth Vader rocks. Hope the sugar rush has abated somewhat by now.