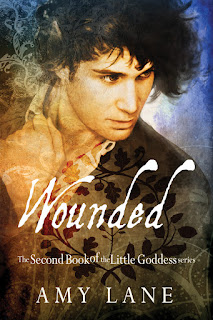 Okay, folks. Backlist Ba-Dump-Bump tomorrow, and in the meantime, I've got some Little Goddess for you.  (I work as Art Docent tomorrow-- we're doing trains! Yay!) I spent the evening finishing my Christmas story, so this is a little short--but it's celebratory. I love it when I get a break from my queue!

As soon as they hit the Grapevine, Zeb turned around and started going through the stuff in the back of the car.

"Oh, thank God, clothes."  He came back with sweats--not fresh out of the dryer, but not ripe either--and a T-shirt that wasn't crusted with blood and called that a win.

"You're welcome for my stuff," Colton said dryly, and Zeb realized he felt no shame or embarrassment for completely seizing anything he needed.

"That's awesome, do you have a phone charger?"

Oh my God.  "Seriously?"  And sure enough, there it was, plugged into the portal by the unused ashtray.  Zeb pulled his phone from around his neck and plugged it into the charger, and then declined to look.

"Is it working?"  Colton gave it a sort of side-peek and Zeb shook his head.

"We can only hope. I went swimming with that thing twice. It would be great if it did though. My boss could have people waiting for us in Bakersfield, and it is scary out there alone."

"Yeah, and so's your friend," Zeb sighed.  He looked out of the window in time to see the sun scorched lunar landscape of I-5 pass him by.  "Apparently all the werewolves south of Bakersfield are nucking futz."

"There are werewolves north of Bakersfield?"  The kid sounded anxious and frightened, and Zeb couldn't really blame him.

"I knew that. Anyway, Colton-- you gotta understand. From my part of the country, being a werewolf is all happy fine."

"You mean everybody knows?"  He was so startled the car actually swerved, and Zeb settled the wheel before they both became road hamburger.

Zeb sort of leaned then, in the front of the car, so Colton would feel his animal warmth and be comforted--it was a very wolf thing to do, a very Green's Hill thing to do, and it seemed to work. A pretty kid--darkly tanned skin, dark eyes, hair that hung down past his collar.

"Calm down," Zeb said-- probably unnecessarily. "The whole world is the same place. But underneath the stuff you know--in the places you can't see--there are people you never knew about, okay? Werewolves, elves, vampires--"

"Seriously? Are they sparkly?"

Ugh. "They're the scariest warriors I've ever seen and most of them are sarcastic fuckers to boot. God, we need to make another vampire movie, I'm telling you."

Colton's smile showed even white teeth.  "So noted," he said dryly. "So... there are things."

"Yes there are. And in my neck of the woods, they co-exist. Like... seriously. The vampires feed from the were creatures and the were creatures act as the hired muscle and the elves oversee everyone and own the businesses and we all keep each other safe."

"Do you see Kumbaya at breakfast and dinner?"

"God, you should have been a vampire. No. But we watch each other's backs."  Zeb felt the loss of the guy who'd gotten dismembered in the bathroom keenly. "I was sent down with a perfectly nice were-wolf, and he's dog food. My people are going to be pissed, and I'm quite frankly scared. We're not easy to kill and every wolf  I've run into down here has smelled like a vomit barbecue"

"Thanks a lot," Colton sniffed, and Zeb rolled his eyes.

"You know, we have a recruitment program. They'd love to convert you, you'd fit right in."

"Yeah?" Colton glanced at him to see if he was kidding or not. "What're the recruitment requirements?"

Zeb grunted and stared out the window again. "Mostly, you have to have fucked up your life so completely that dropping off the map and starting over again as a werewolf or a vampire is no  big deal."

The sound Colton let out was plaintive, and Zeb glanced at him in time to see a bleak, lost expression cross his expressive face. "I just left the only place I've ever lived," h e said, voice raspy. "The guy I thought I was going to spend the rest of my life with turned into a werewolf and tried to eat me, and I'm in the only decent possession my family has, speeding towards Bakersfield with a guy who was wearing blood and fur about half an h our ago.  That doesn't qualify?"

Shit. "Are you so addicted to heroin you stole someone else's shoes to buy your last fix?"

Colton let out a short bark of a laugh. "Uhm, no."

"Then you're doing better than I was."  Zeb's sigh shook his toes. "God, all I wanted was to do a favor for my leaders, you know? Three years of laying low, not being a leader, just keeping my head down and hoping they let me stay, and just once I wanted to earn my place at the table, right?"

"Can I ask what happened?" Colton's voice shook, and maybe it was a scary question when the answer was coming from a guy who had been mostly wolf all day.

"We knew something shitty was going on down here," Zeb muttered. "We knew it. And our people got attacked in Monterey, so I asked Teague-- the head of the werewolves where we're at--if I could take a look. And hey, he just fell from like a ten-story drop and is still recovering, and he said, "Yeah, sure,' so I snagged another shapeshifter, and hey. Trip to Disneyland, right?"

"Except we stopped for gas over the Grapevine and some guy carves my friend up like sushi and tries to blow me away. And all I want right now--all I seriously want--is to be back on my hill, hiding under my bed, after I scream 'Abort abort abort! Natives AREN'T friendly!' so I can say I did my job."

Colton was laughing, snickering softly, and Zeb felt like a complete asshole.

"Not really a warrior werewolf, are you?"

"Nope," Zeb said sourly. "They save that job for the vampires. You know what job I do best for them?"

"I got no idea," Colton said, still smiling.

Colton's snickers rattled through the car and the alien landscape of Central California stretched before them, if only their gas would hold.

Werewolves south of Bakersfield nucking futz - TRUE STORY. Thanks for thisAmy, I'd forgotten! <3