Let's hear it for September!

September for me is usually pretty busy--kids starting school, conferences, conventions, soccer. And while the school is online, and Mate is the only one doing soccer because Squish doesn't want to do it if there's only distance practicing without games, and the conferences have been canceled, it still manages to be my busy month!

For one thing, I get to teach classes in the next month--three if you count one in October, and I'm SO STUPIDLY EXCITED about teaching classes on Zoom. So I've been prepping for those and it's a different way of thinking, and that's fun! Also, I have not one but two releases this month--one of them is a teaching book, which, yeah, I know, *yawn* *snore* but, again--stupidly excited for Fiction Haiku to come out. Again--something new, and something I threw myself into, so even if no-one reads it, it's still a pretty big accomplishment for me!  Woot! The other book, Safe Heart, IS a  category romance, and it's action/adventury, and fun and snarky and hopefully delicious!

And speaking of delicious--and busy!--this was one of the most deliciously busy Kermit Flails in a while! In paranormal romance, we've got Reclaiming Quin, by Parker Williams, and you guys know the adage--you can never go wrong with werewolves, right? Then comes Kim Fielding's new--and MUCH awaited--audio release, The Bureau: Volume 2. Gotta tell you, I have both of these queued up in my audio, and I'm so excited for them! Woot!  And for contemporary, we've got Kate McMurray's delicious rom-com, Save the Date!  Oh--and don't forget the kinks and quirks--the luminous Jaime Samms is rereleasing her Bound to Fall, and Jaime does know how to torture her guys in the best of ways.

So there you go--fun stuff all around! Hopefully something for everybody--and fun stuff to boot!

September is definitely busy--but I listen or read a little every day. I hope you guys have time to sneak in a little bit of romance in your busy September as well!

Shifter Quinn Adler knew he would live and die as a slave.

Quinn’s life was filled with pain until he was rescued from an abusive pack. But in Lydon, Quinn can’t be sure of anything, so he’s terrified of everything. With no one to give him direction, he is lost—until Deke takes control of him.
Deke Timmons hates that he has to play the role of master to his mate.Unfortunately, Quinn won’t accept his love until Deke can show him what being mates means. Vowing to help Quinn, Deke takes him into the world he’s never seen. Though sometimes their relationship is tense, his methods seem to be working. Then a power-mad Alpha swoops in to kidnap Quinn and ends up getting Deke by mistake.Now Deke must play submissive to a wolf complicit in Quinn’s abuse. He’ll do whatever it takes to get back to his mate—but with Deke in peril, Quinn must find his courage and reclaim the person he was meant to be.
Buy Here
Or Here 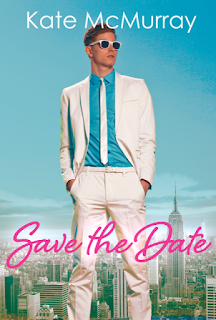 Save the Date
by Kate McMurray
Tristan knows he and his ex-boyfriend Stuart were not meant to be, but that doesn’t make the invitation to Stuart’s wedding any less of a punch in the face. Tristan decides the best strategy is to find a super hot date to prove to Stuart that he’s moved on and is doing just fine, thanks.
The path to the altar is fraught with obstacles, though, and Tristan has to deal with the wilds of online dating, wardrobe malfunctions, men who look like pirates, emotional baggage, grooms with cold feet, and sports team rivalries before he even gets to the wedding. But then Tristan finds love in the last place he expects, but it’s going to take more than a reply card and a nice suit to hang onto it.
Buy Here
The Bureau: Volume 2 audio
Written by Kim Fielding
Narrated by Joel Leslie 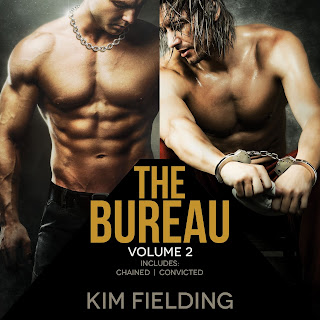 This collection contains the fourth and fifth Bureau novellas. Bureau stories can be read in any order.

An agent for the Bureau of Trans-Species Affairs? That’s the best job in the world. And it’s enough for Terry Brandt, who doesn’t need personal relationships complicating his life. His newest assignment puts him undercover, investigating a Hollywood agent who may have some evil tricks up his sleeve.

Edge is not the man he appears to be. Although he’s a member of the Hollywood agent’s security staff, his true situation is darker and deeper than that. Ordered to seduce the new prospect, Edge finds himself caught in conflicting loyalties.

Vietnam veteran Kurt Powell’s addiction almost cost him everything, but a job as federal agent with the Bureau of Trans-Species Affairs helped him find sobriety and purpose. Now he tracks down dangerous paranormal creatures as well as humans who abuse their magical powers in illegal ways.

Sent from Belfast to the United States as a boy, Desmond Hughes later fell into a disastrous relationship that led to horrific murders. He’s spent 17 years in a bleak prison with few comforts and no hope of release.

A new mission throws Kurt and Des together in a desperate attempt to prevent disaster. Sometimes what’s long been lost can still be found, but the road to redemption is never easy - and a mutual attraction may not ease the way.
Buy Here
Bound to Fall
by Jaime Samms 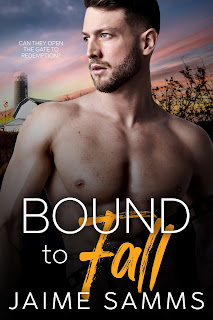 With so many fences between them and happily ever after, two men wonder if it’s worth opening the gate.Ten years ago, Eddie Crane, an actor on the rise, loved his costar and dreamed of the day they could be together. But his love, with his submissive nature, couldn’t handle fame, and before Eddie could help him, he died in a car accident—with Eddie at the wheel.Now, scarred and guilt-ridden, Eddie buries himself in bad decisions and prays that a stunt—on or off camera—will go wrong.Teenaged fantasies about the actor on his wall distracted Arthur Pike from real life—his dead father, runaway mother, gruff grandparents, and his unrequited love for his cousin’s straight husband. Now grown and off the farm, Pike is a horse stuntman hired to teach a reluctant Eddie to ride.Pike is drawn to Eddie’s dominant nature despite the sadness clinging to the actor. Eddie let one lover down, but in Pike’s submissiveness, he sees the possibility for redemption.
Buy Here
Crafting Category Romance: The Art and Science of Fiction Haiku
by Amy Lane 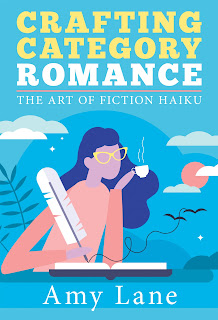 Category romance is a precise art. With such a small word count, writing the perfect category romance is a little like writing a haiku. But how do you write a book in seventeen syllables? How can you cram compelling conflict, satisfying character development, and toe-curling romantic tension into less than sixty thousand words?In Crafting Category Romance, two-time RITA™-nominated author of nearly one hundred books Amy Lane describes the rules of engagement, traps to watch out for, and how to leverage common tropes to create conflict, craft a character, develop a plot, and leave readers with a happy ever after that's different every time—all in a tidy package. With practical exercises in plot, conflict, and character development, Crafting Category Romance will teach you how to use the rigid rules and expectations of the genre to your advantage and win a loyal readership following for life.
Buy Here
Safe Heart
by Amy Lane 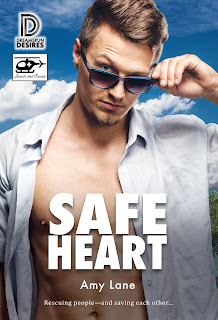 Five months ago boy-band lead singer Cash Harper left Glen Echo in a hospital in Jalisco… and broke his heart.

Glen’s heart is the only home Cash has ever known. He’s spent the past five months trying to find his friend Brielle and make sense of his own instincts. Now he’s ready to be a real partner and lover to Glen—but first they have to finish their original mission.

Glen is ready for Cash to walk through his door needing help, but he is absolutely determined not to let him back into his heart. Men don’t run. Cash did. End of story.

Rescuing Brielle will take the full talents of Glen’s search and rescue company, and that means Cash needs to re-earn the team’s trust. Between Bond-villain traps, snakes that shouldn’t be there, and bad guys with guns, they all have plenty to negotiate. If Cash can prove he can stay the course and that he deserves Glen’s faith, they might survive this op whole and ready to love.