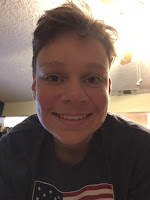 So, the kids and I got haircuts today--and I forgot to get a picture of Squish, but I have to tell you, she was adorable. ZoomBoy and I took selfies to, because I bobbed mine right below my ears. Looks... well, whatever. Looks like hair. I don't have to brush it anymore, that's the thing. Also, to get the inches off, the hairdresser pulled it all to the top of my head and buzzed off my pompom which was hilarious, and that was the thing. 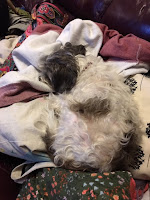 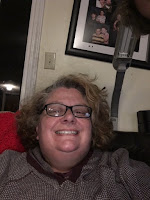 So, eyeballs deep in stuff tonight, trying to send a newsletter, trying to do promo, and do I have a blog post for Christmas Kitsch tomorrow? (Short answer, I DON'T KNOW!) Anyway-- Super short blog post here tonight, but I thought I'd mention that A Fool and His Manny is out on audiobook!

Also, haircut selfies. Because.
ALSO, I thought it worth mentioning that Geoffie is sleeping on not one, not two, but FOR yarn project bags.


Because she can do more damage that way. 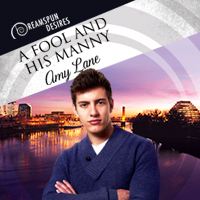 Anyway, have some Fool and His Manny.

A Fool and His Manny-- on Audio
By Amy Lane

Seeing the truth and falling in love.

Dustin Robbins-Grayson was a surly adolescent when Quinlan Gregory started the nanny gig. After a rocky start, he grew into Quinlan’s friend and confidant - and a damned sexy man.

At 21, Dusty sees how Quinlan sacrificed his own life and desires to care for Dusty’s family. He’s ready to claim Quinlan - he’s never met a kinder, more capable, more lovable man. Or a lonelier one. Quinlan has spent his life as the stranger on the edge of the photograph, but Dusty wants Quinlan to be the center of his world. First he has to convince Quinlan he’s an adult, their love is real, and Quinlan can be more than a friend and caregiver. Can he show Quin that he deserves to be both a man and a lover, and that in Dusty’s eyes, he’s never been “just the manny?”

You and Mate brought up some awesome kids.