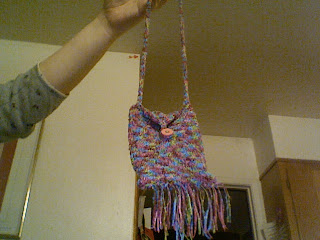 Okay... has anyone else succumbed to this little ploy?

I brought Squish to the yarn store this Saturday, and she was actually pretty well behaved. (I need to remember this because she's been a poster child for children's straitjackets ever since.) Anyway, she went touring the digs and impressed a couple of people-- one notable conversation went like this:

"Hello, sweetheart," (said the good humored woman with no kids who was easily impressed, "you look like you know what you're doing. Do you knit?"

Needless to say, she was a big hit.

Anyway, so there we were in the yarn store, when she comes up to me going, "Mom mom mom mom mom... come look." (Seriously--I guess only my kid could get that excited in a yarn store, right?) I went to look and there was a fairly simple little purse made of ribbon yarn, with a fringe. "You're going to make me that purse with this yarn!" And she held in her hands a ball of the exact yarn, only in rainbow colors. Considering how high up this yarn was, it was either a really good guess, or the kid knows her fiber. Anyway, the purse was made of two colors, and not only do I hate ribbon yarn but it's hella pricey, so I was NOT going to buy the second accent color, but I was left with something of a quandary. How do I finish the purse with only one skein of yarn?

I apologize for the unbelievably crappy picture-- I haven't even brushed my teeth yet and my hair is a thing of mystery and yet not beauty at this hour of the morning, so it was a balance between getting the purse in the shot and me out of it. Anyway, it was close. I literally stopped working the i-cord at the end so I could put the fringe on, just to make sure I had enough yarn. In the end, the only leftovers I had were the clippings from the bottom of the fringe. The topper to the whole experiment was the button.

There I was, late at night, and Squish was up when she wasn't supposed to be. I held the mostly-finished purse up for Mate's inspection and said, "Now all I need is a button."

"There's a button," said Squish from the kitchen. "It's under the spiderwebs."

And sure enough, there was the button, under a herd of dust-buffalo. It was perfect--perfect color, perfect size, and the holes were even big enough to sew with a piece of the ribbon. It was a.. a... a FREAKIN' MIRACLE! No trips to the yarn store for one ball of yarn to finish two yards of the project, no going to JoAnnes to buy a cheap button... it just ALL FELL INTO PLACE.

*sniff* You all know the fibers only align like that in the card every so often, right?

Anyway, it turns out the button had been an embellishment on one of Chicken's old socks, and she thought it was frickin' hilarious that it would end up on this little purse. Squish loves the purse--turns out, ribbons knit up with this amazing elasticity for something that has NO give whatsoever in the skein. She can stuff an entire beanie baby in that little beauty. She is pleased.

Of course, knitting serendipity only happens like this every so often. As if to make up for that nice little moment, I've just cast on three times for the same sweater. I think it's because in a house full of rare handpaints, I'm knitting the whole thing in Encore, color petal pink, but that could just be me.
Posted by Amy Lane at 8:12 AM

Obviously, Squish has the entire fricking universe so tightly wrapped around her little finger that anything created for her pleasure will come together with all the stars in perfect alignment and the fates smiling benignly on all involved. It's a cool little purse, too! Good job, mom.

I LIKE Encore in petal pink! Handpaints are gourmet. Encore is bread and butter. Quit sneering at it and it might agree to play nicely. It's wonderful for what it is!

It's a very lovely purse. Squish did a nice job on it. :)

I hope you didn't waste all your knitting karma on the purse. Although, if it makes the lovely Squishy belle happy, then it's hardly a waste, now is it?

dont you just love when the unverise aligns that way

Happy Twenty10 and I'm glad you had a great Christmas!
Did the parcel make it?

Great purse! Squish obviously has an eye for fiber AND fashion :-)

I got some needles and yarn the other day. Now what to attempt for the first masterpiece...

My mother has been lying to me for the last 10 years or so that she is going to make me a traditional Icelandic wool jumper. I'm still waiting.

Meanwhile, I found this - knitters enter at own risk!
http://www.nordicstore-wool.com/

And my daughter does that, I think it's something to do with having a knitter for a mother!

Kickass purse there. I keep going to the craft store and poking around at the knitting stuff. I really want to start but it's daunting. I have this idea that i'll suck at it. So I end up leaving and going across the parking lot to Borders. Now you know why my book collection is so large.

Thanks for the laugh. It is rare indeed for the fiber fates to smile so brightly. I'm afraid that you will in fact pay for that at a later date. Until then, bask in it.